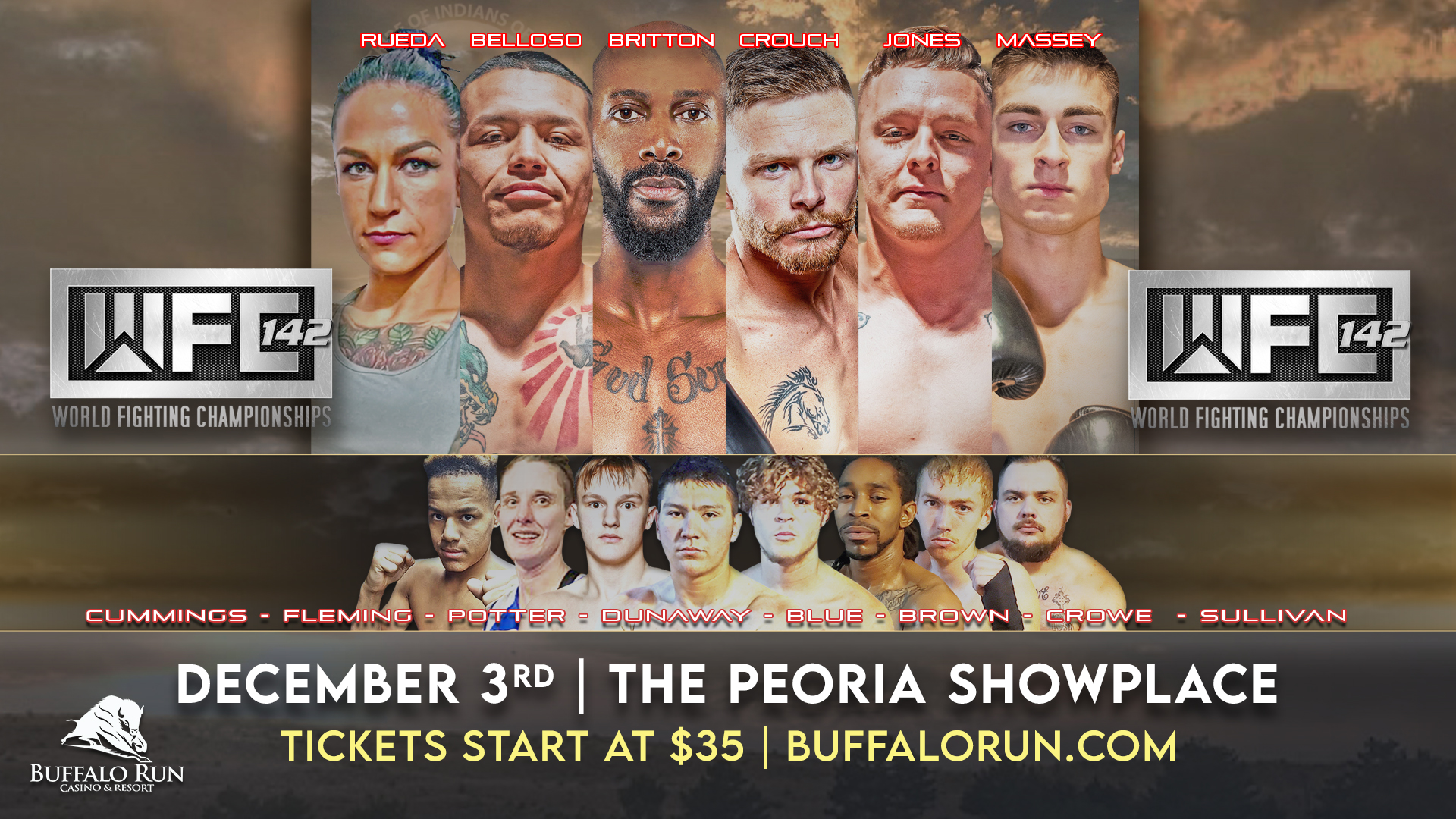 WFC 142 Live at Buffalo Run
Date of Show: December 3, 2022
Tickets Start at $35 | Open to all ages w/ Restrictions.
The Peoria Showplace
Doors @ 6PM | Show @ 7PM
Tickets are on Sale Now!
About WFC Boxing
WORLD FIGHTING CHAMPIONSHIPS™ is a combat sports company that promotes Mixed Martial Arts, Boxing, and Kickboxing events. We promise to be an event filled with energy, gorgeous girls, great music, and toe to toe brawls. World Fighting Championships™ is dedicated to giving the best combat sports athletes in the world a place to showcase their talent. World Fighting Championships™ has hosted over 120 events in 25 different markets throughout the US and has been featured on Inside MMA, ESPN, Yahoo, USA TODAY, CNN, Spike TV, MMA Junkie, and Fox Sports.
.
WFC 142 Live in #MiamiOK at Buffalo Run Casino & Resort!

Find Out More About Diamond Rio

Diamond Rio Holiday & Hits Live at Buffalo Run
Date of Show: December 22nd, 2022
Tickets Starting at: $30 Age: 21 & Over Only
The Peoria Showplace
Doors @ 7PM | Show @ 8PM
Tickets on Sale Now!
About Diamond Rio:
Formed in 1989 in Nashville, TN the band consists of Gene Johnson (mandolin, tenor vocals), Jimmy Olander (lead guitar, acoustic guitar, banjo), Brian Prout (drums), Marty Roe (lead vocal), Dan Truman (keyboards), and Dana Williams
(bass guitar, baritone vocals). Diamond Rio’s most recent release I Made It, is their tenth studio album. The title track was co-written by the band’s lead guitarist Jimmy Olander and features 11 new songs. Produced by Olander and Mike Clute, I Made It is available on iTunes and www.diamondrio.com
Diamond Rio signed to Arista Records and in 1991 with the release of “Meet In The Middle” became the first country music group in history to reach No. 1 with a debut single. The band is also known for their hits “How Your Love Makes Me Feel,” “One More Day,” “Beautiful Mess,” “Unbelievable,” “In A Week or Two,” and more. They released their first-ever autobiography, Beautiful Mess: The Story of Diamond Rio on Thomas Nelson in 2009.
The band known for playing every note on every album recently celebrated their 30th Anniversary, has sold more than 10 million albums, won a Grammy Award, a Dove Award, six Vocal Group of the Year wins (CMA and ACM), released two Greatest Hit albums, a live and Christmas project, earned five multi-week no. 1 singles, 22 Top 10 singles, three certified Platinum and five gold albums, released an autobiography – and with zero band member changes. Known for their charity commitments including long-time spokespersons for Big Brothers Big Sisters, the band has raised over $1,000,000.00 for non-profits and received the Minnie Pearl Humanitarian Award.

Find Out More About Neal McCoy

Neal McCoy has released fifteen studio albums. In 1993, Neal McCoy broke through with the back-to-back number 1 singles No Doubt About It and Wink from his platinum-certified album No Doubt About It. His commercial success continued into the late 1990s with two more platinum albums and a gold album, as well as six more Top Ten hits. A seventh Top Ten hit, Billy’s Got His Beer Goggles On, came in 2005 from his self-released That’s Life.

Neal has been on 17 USO Tours around the world and continues to say it’s one of the achievements he’s most proud of. He is also the recipient of multiple Humanitarian awards from The Academy of Country Music, The Country Radio Broadcasters and The Masonic Grand Lodge. In 2016 Neal has again made a move to continue his patriotic values by reciting the Pledge of Allegiance “Live” on his Facebook page every morning. He’s reached millions of viewers all over the country and around the world. Currently he is closing in on 2000 days in a row and going strong. Neal still maintains a very busy touring schedule all through the year. Make sure to catch a show when he’s near because as Neal says “No two shows are the same!”

Neal also supports his own charity organization: East Texas Angel Network which is committed to the enhancement of the lives of children of East Texas who are living with terminal or life-threatening diseases. He hosts a yearly golf tournament, auction/dinner & concert over two days in the Fall.

The foundation has been going strong since 1995 and to date has raised over 9 million dollars for approximately 500 hundred East Texas families.